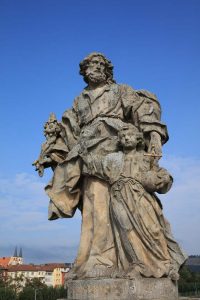 Statue of Josephus in Germany by Bridge in Wurzburg. After receiving freedom from slavery by Emperor Vespasian he took the emperor’s name, Flavius, thus becoming Flavius Josephus. Josephus was a soldier in the Roman/Jewish war. He was an eyewitness to Rome’s First-Century conquest of Judea and would become an indispensable part to a proper understanding of Jewish thought during the time of Christ..

I do not know which despot, king, or president first invented “the big lie” idea, but it has certainly been known and practiced a long time. “The big lie” means that if you repeat a lie loud enough and often enough, people will believe you. Nero used it when he fingered the Christians for the fire that destroyed Rome. Adolf Hitler used it when he blamed Germany’s post-World War I economic troubles on the Jews.

The Pharisees were using “the big lie” in the middle section of Matthew 12, verses 22-37. Jesus had healed another demon-possessed man, one who had been blind and mute, and the Pharisees denounced His power by repeating (only sharper this time) that He was getting His power from the devil: “It is only by Beelzebub, the prince of demons, that this fellow drives out demons” (v.24). They had suggested this for the first time in Matthew 9.34, and they brought it up again here because of two new circumstances: First, Jesus had performed another dramatic exorcism, and second, the common people had begun to speculate that Jesus might actually be “the Son of David,” that is, the Messiah (v.23). The Pharisees were probably beginning to fear that they were losing their hold on the people.

“Then a demon-oppressed man who was blind and mute was brought to him, and he healed him, so that the man spoke and saw. And all the people were amazed, and said, “Can this be the Son of David?” But when the Pharisees heard it, they said, “It is only by Beelzebul, the prince of demons, that this man casts out demons. …by whom do your sons cast them out…Or how can someone enter a strong man’s house and plunder…?”

The man had been in a truly dreadful condition, as all sin’s captives are. The demon had possessed him, and as a result, the man could neither talk nor see. Matthew has already taught us to think of physical ailments in spiritual terms. Therefore, we observe that the man could not talk in order to call out to Jesus to save him, nor could he see his way to come to Jesus. His friends brought this helpless sinner to the Savior, and Jesus healed him immediately.

This narrative, however, is not given to teach us about demon possession or what it might signify. It is about the Pharisees’ “big lie” and about how Jesus answered it. Significantly, Jesus’ response was not different from what He had been doing all along. We have seen several times in our studies that Jesus had come chiefly to teach and preach. Here He does both in His answer to the Pharisees. First, He teaches them. Then, second, He preaches to them, warning them to repent of their sin, believe on Him, and be saved. It is what Jesus might say to us if we have similarly evil thoughts or objections.

We can summarize Jesus’ teaching first. It is in verses 25-29:

“I cannot be exorcising demons by demonic power, because then Satan would be fighting against himself, and if he should do that his kingdom would not stand.” Satan is much too shrewd to liberate persons he has enslaved.

“If I am not driving out demons by the power of Satan, then I must be doing it by the power of God.” In spiritual matters God’s power is the only other power that exists, and in any case, it takes the supreme power of God to overcome the great but not omnipotent power of the devil.

“If I am driving out demons by the power of God, then the kingdom of God has come to you.” The tense of the verb “has come” is important. It is not future, as if Jesus were merely pointing to something that would be true one day. “Has come” is a present tense, pointing to a present reality. The kingdom has come, and the reason it has come is that Jesus has come.

“If the kingdom has come because I have come, then I must be the king, the Messiah.” This is Jesus’ obvious implication. In other words, the people’s tentative conclusion in verse 23 was the right one.

Verse 27 does something else too. It shows the inconsistency of the Pharisees’ position. They had disciples who claimed to be able to drive out demons, and if this were true (the Pharisees would certainly claim it was), it was certainly not by anything other than God’s power. How could they claim that Jesus did His work by Satan’s power while maintaining that they did the same thing by God’s power?

We might question whether the Pharisees’ disciples were actually able to perform exorcisms, but Josephus is one fairly reliable historian who says they did. In his Antiquities and again in The Jewish War, he provides several such accounts. In the first of these works he claims to have seen an exorcism himself: “I have seen a certain Eleazar, a countryman of mine, in the presence of Vespasian, his sons, tribunes and a number of other soldiers, free men possessed by demons.” He reports in some detail how this was done.

In verse 29 Jesus summarizes His teaching, indicating this by the words “or how.” It is a way of saying that what follows is what He has already taught, but He is saying it again by way of an image. In this illustration Jesus pictures Satan as a strong man whose house contains treasures, which are the men and women whom he has taken prisoner. Jesus is stronger than Satan. Therefore, He is able to bind the strong man and rob his house. The illustration adds force to the interpretation of Matthew 11.12 looked at a few weeks ago; that is, in Jesus the kingdom of heaven has been forcefully advancing.