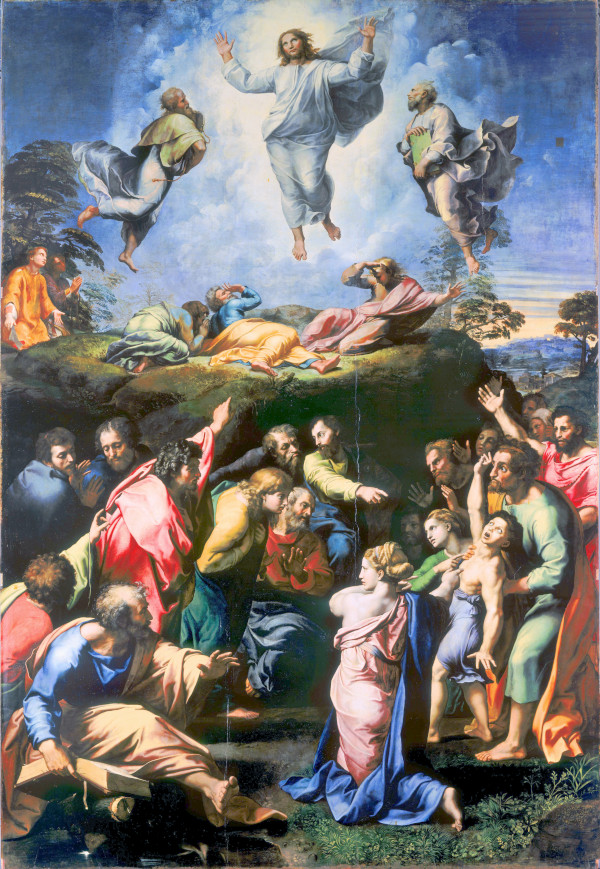 In 1517, the same year in which Martin Luther posted his “Ninety-Five Theses” on the door of the Castle Church in Wittenberg, Raphael Sanzio began a painting of Christ’s transfiguration. When he died in 1520 at the age of thirty-seven, the painting was not finished, but Raphael had completed enough for us to understand it. He showed Jesus on the mountain with Peter, James, and John. Everything is bathed with light. But in the same painting, at the bottom, Raphael shows the other nine disciples trying to cast a demon out of the epileptic boy and failing miserably. It is a way of saying that mountain-top experiences coexist with valleys and only by the power of the Son of God can we have victories in our lives.

The flow of chapters 14-17 goes like this: Jesus teaches the disciples, they learn, but then they blunder badly. Understanding followed by misunderstanding. Progress followed by failure. This is the pattern. Yet it is our pattern too. We all move ahead spiritually but then fall back badly. When we realize how often we fail and how prone to sin we are, we marvel at the patience of God, who “knows how we are formed” and “remembers that we are dust.” Jesus is a very patient teacher.

Although Mark’s Gospel is shorter than Matthew’s, Mark’s stories are often longer than the parallel accounts in Matthew. Mark’s story covers nineteen verses, including a lengthier description of the possessed boy’s symptoms as well as the father’s struggling faith. This is the man who told Jesus, “I believe; help my unbelief!” Matthew eliminates these points to concentrate his account on the disciples’ lack of faith.

At first glance it seems surprising that the disciples are unable to heal the epileptic boy, particularly since they had been given authority to cast out evil spirits earlier and had done so. Here they fail. The obvious question is Why, which is what they ask Jesus: “Why could we not cast it out?”

Jesus tells them, “Because of your little faith.” In Mark He explains, “This kind cannot be driven out by anything but prayer.” These are not two different explanations, and we can understand how they go together when we think about what Jesus is saying in Matthew. When Jesus tells the disciples that they have “little faith,” it is not a matter of quantity since He explains in the next verse that even faith “as small as a mustard seed” can move mountains. Moving mountains is a proverbial expression for overcoming difficulties. The disciples must have had at least that much faith in some sense or they would not have tried to do the exorcism. Instead of referring to an inadequate amount of faith, Jesus is referring to a faith that is deficient. That is, it is not the kind of faith that is effective. This is clear from Jesus’ earlier words about an “unbelieving and perverse generation.” An unbelieving generation is a faithless generation, which is what the disciples and the others were at this time.

Biblical faith contains three elements: (1) the content of what must be believed, (2) assent to that content, and (3) trust in or commitment to Jesus Christ as the heart of the teaching. Trust or commitment is what makes faith personal and not just an intellectual or mechanical thing, and it is that personal element that was lacking here. It is why in Mark’s account Jesus tells the disciples that the reason they had failed to exorcise the demon was that they had not supported their efforts by prayer.

The problem was that they were approaching the challenge with a formula, expecting inevitable results, the sort of error expressed in the Latin phrase ex opere operato. It means that the results follow from the mere doing of the work, like sacraments producing right results with or without faith, just because they are done. This is not biblical teaching. Neither the sacraments nor anything else achieves spiritual results mechanically since effective faith is a relationship in which we depend on God.

There are at least two clear lessons from the story. First, to be effective in serving God we need a continuing relationship with God. It is always easy for a genuine experience of God’s grace and a genuine relationship with God to deteriorate into something merely mechanical. Because we had God’s blessing in the past we think it will continue unchanged so long as we merely do the right things. We go to Church. We read our Bibles. We even teach a class and serve others. But sadly we can do those and other worthwhile things without any real reliance on God, without true faith, and therefore fail badly. Nothing, however good in itself, can substitute for a personal, continuing, trusting relationship with God.

Secondly, there are no shortcuts to spiritual authority. The disciples must have been seeking a shortcut when they came to the epileptic boy: do the right things, say the right words. But it did not work. They needed to go back to Jesus to learn why they were failing and what they needed to go on. When they did this they grew. Eventually, the time came after Jesus had sent out a much larger number of disciples, that they returned to Him with joy, saying, “Lord, even the demons submit to us in your name.” Just because you and I fail in a first effort does not mean our lives will always be characterized by failure.

Pastor Steve can be reached at PastorSteve@MaranathaBibleChurch.org