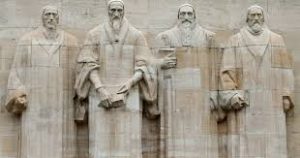 Reformation Wall is located in Geneva Switzerland. In addition to the four 16’ high reformers pictured, William Farel, John Calvin, Theodore Beza, and John Knox, six other smaller statues exist including American Governor and Baptist Pastor, Roger Williams. The Wall was built to commemorate Calvin’s 400th birthday on the grounds of the University of Geneva. Engraved on either side of the four figures in Latin, are the words, “Out of Darkness Light” – motto of the Reformation.

What is Reformation Day? One of Martin Luther’s 95 Theses, number 62, simply declares, “The true treasure of the Church is the most holy Gospel of the glory and grace of God – the Gospel of Jesus Christ.” That alone is the meaning of Reformation Day (October 31, 1517).

Luther had made his discovery through reading the Bible. But few others had access to a Bible, or could read it. In the years that followed the reformation Luther set about translating the Bible into an easy, everyday German so that all around him ‘might seize and taste the clear, pure Word of God.’

On November 1, 1517, a massive exhibit of newly acquired relics would be on display at Wittenberg, Luther’s home city. Pilgrims would come from all over, genuflect before the relics, and take hundreds, if not thousands, of years off time in purgatory. Luther’s soul grew even more vexed. None of this seemed right. It is the day the light of the Gospel broke forth out of darkness. It was the day that began the Protestant Reformation. It was a day that led to Martin Luther, John Calvin, John Knox, and many other Reformers helping the Church find its way back to God’s Word as the only authority for faith and life and leading the Church back to the glorious doctrines of justification by grace alone through faith alone in Christ alone. It kindled the fires of missionary endeavors, it led to hymn writing and congregational singing. Martin Luther’s “A Mighty Fortress” was the Reformation’s ode to joy:

A mighty fortress is our God
A bulwark never failing;
Our shelter He, amid the flood
Of mortal ills prevailing.
For still our ancient foe
Doth seek to work us woe;
His craft and power are great,
And, armed with cruel hate,
On earth is not His equal.

Did we in our own strength confide,
Our striving would be losing;
Were not the right Man on our side,
The Man of God’s own choosing.
Dost ask who that may be?
Christ, Jesus, it is He;
Lord Sabaoth His name,
From age to age the same,
And He must win the battle

And tho’ this world, with devils filled,
Should threaten to undo us;
We will not fear, for God hath willed
His truth to triumph through us.
The prince of darkness grim –
We tremble not for him;
His rage we can endure,
For lo! his doom is sure,
One little word shall fell him.

That word above all earthly pow’rs –
No thanks to them – abideth:
The Spirit and the gifts are ours
Thro’ Him who with us sideth.
Let goods and kindred go,
This mortal life also;
The body they may kill:
God’s truth abideth still,
His kingdom is forever.

What Luther’s discovery had made abundantly clear was that God is glorious: beautiful, good, kind and generous. We can therefore actually enjoy God. Not hate. Not avoid. Enjoy. And it led to the centrality of the sermon and preaching for the people of God. It is the celebration of a theological, ecclesiastical, and cultural transformation.

The practical consequences throughout cultures influenced by the Reformation were vast. Johann Sebastian Bach, ‘a devout Lutheran all the way down to his tapping toes.’ When satisfied with his musical compositions, Bach would write on them ‘S.D.G.’ for Soli Deo Gloria (‘Glory to God Alone’). For through his music he wanted to sound out the beauty and glory of God, so pleasing both God and people

The glory of God, he believed, rings out through sunsets, stars, mountain peaks and music, bringing joy wherever it is appreciated. And the enjoyment of those things can give people a taste of how enjoyable is their Creator. God, Bach saw, is to be enjoyed. In fact, the deepest and most satisfying happiness can only be found in knowing God.

This was all quite different to what so many had known before, and many still believe today. Luther said, ‘I did not love, yes, I hated the righteous God.’ Doubting if they had ever made themselves worthy of heaven, people shook with fear at the thought of how God might judge them. There are many today, while not shaking with fear per se still have doubts to their worthiness – ‘have I done enough? Am I worthy yet?’

Armed with his new discovery, Luther saw he could face such fears like this: ‘When the devil throws our sins onto us and declares that we deserve death and hell, we ought to speak this: “I admit that I deserve death and hell. What of it? Does this mean that I shall be sentenced to eternal damnation? By no means. For I know One who suffered and made satisfaction in my behalf. His name is Jesus Christ, the Son of God. Where He is, there I shall be also.’”

Before the Reformation, the city of Geneva in Switzerland had the motto, “After darkness I hope for light. It was a city hoping for light. Then the happy message of the Reformation swept through. In commemoration coins were minted with a new and cheerier motto: “After Darkness Light.” The news of God’s love, generosity and kindness to failures was like light in darkness. So now they declared, they had found what once they had hoped for.

Through the Reformation, a tidal wave of social improvement was unleashed. Luther had joined a monastery to do good works for God. But he came to see that it is not God in heaven who needs our good works, it is people on earth.

So we celebrate Reformation Day. This day reminds us to be thankful for our past and to the Monk turned Reformer. What’s more, this day reminds us of our duty, our obligation, to keep the light of the Gospel at the center of all we do.