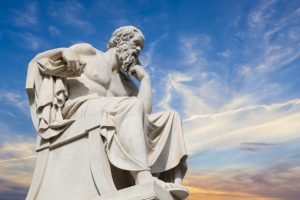 Socrates lived in the fifth century, was a contemporary of Plato and is credited as the founder of Western philosophy. Sentenced to death by the Athenian Democracy for his non conformity, Socrates worked hard to stimulate thinking – promoting thinking among individuals, thus his well known habit of asking his students many questions to encourage, even antagonize them to think and to re-think their views on virtually everything so they came in their own minds to a solid understanding of whatever the discipline or subject may be. 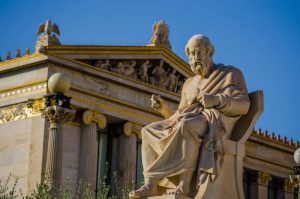 Plato’s school, “The Academy,” lasted over nine centuries. Plato studied with Socrates. Plato is credited with creating the “first fixed course of study for 3-4 years on one campus.

Where did schools come from? Most people would answer by referring to the school established by Plato in Athens. Plato had studied with Socrates, but Plato was the first to offer a fixed course of study in one location extending over three or four years. Since Plato recruited his students from a public playing field on the outskirts of Athens, called Academus from the name of an athletic hero, Plato’s school became known as the Academy. The school passed from teacher to teacher and lasted for about nine hundred years.

Aristotle, who studied under Plato for twenty years, set up a school of his own, choosing as his site another public playing field called the Lyceum. The Greek word for these playing fields was gymnasium. It is interesting that from these two Greek institutions numerous countries have derived their names for a school. The Germanic nations call their primary schools gymnasiums, Frenchmen call their schools lycees, after the Lyceum, while English-speaking nations call many of their schools academies. The educational establishments of the Western world can be traced to these Greek schools, and millions of today’s students are the successors of those first Greek pupils.

Yet not nearly as many are in the school of Plato as are in the school of Jesus Christ. Jesus founded His school when He told those of His day, “Come to me, all you who labor and are heavy laden, and I will give you rest. Take my yoke upon you and learn from me, for I am gentle and lowly in heart, and you will find rest for your souls. For my yoke is easy and my burden is light.”

Sadly, not all are willing to matriculate in Christ’s school. One of the problems with education today is that many students flatly refuse to learn. If we can carry the analogy this far, it might be said that this was true in the days of Jesus Christ, since the verses in which Jesus invites people to learn of Him are in the middle of two chapters in which Matthew records three negative assessments of Jesus by such persons.

The first example of an at-least-partially negative assessment was that of John the Baptist. Jesus failed to fulfill John’s expectations of what he thought the Messiah should do, which was to bring judgment on the wicked of that day. So John sent disciples to Jesus to ask, “Are you the one who was to come, or should we expect someone else?” Jesus was the one, of course. He was not indifferent to evil. In the verses we are studying (Mt.11.20-24), He predicts a final judgment for those who refuse to receive His message. Still, the time for that judgment had not yet arrived. Instead, it was the day for God’s grace, which Jesus proved by reporting how the sick were being healed and the poor were hearing the Gospel.

The third example, was the hostile reaction of the Pharisees and other religious leaders, who thought Jesus was undermining their teaching, particularly about Sabbath observance. Theirs was a professional jealousy, and the bottom line of their jealous rejection was that they “went out and plotted how they might kill Jesus.”

Jesus here denounces the unbelief of the cities in which He had done most of His miracles. John’s doubt was not unbelief, but these people were not wrestling with doubt. They were completely indifferent, and their indifference was an expression of their disbelief. Jesus has done most of the miracles recorded by Matthew in Chorazin, Bethsaida, and especially Capernaum. He healed the servant of a Roman centurion, cured Peter’s mother-in-law of a fever, cast out demons and healed other sick people, healed a paralytic, raised a dead girl to life, restored sight to two blind men, and cast a demon out of a mute person, enabling him to talk. Those are only a selection of the many great works Jesus did.

Still the people of Chorazin, Bethsaida, and Capernaum would not repent of their sin and come to Him, and He pronounces a judgment on them.

The people of Capernaum never persecuted Jesus, and few of them even criticized Him. They never mocked Him, ridiculed Him, ran Him out of town, or threatened His life. Yet their sin was worse than if they had done those things. Theirs was not the sin of violence or of immorality but of indifference. As one poet wrote,” “They only just passed down the street, and left Him in the rain.”

Jesus’ teaching perhaps mildly interested them, and His miracles entertained them, but nothing more. His grace never rent their hearts, His truth never changed their minds, His warning about sin never provoked repentance, and His offer of salvation never induced faith. And because of their indifferent unbelief, Jesus said to them,” I say to you that it shall be more tolerable for the land of Sodom in the day of judgment than for you.”

One eighteenth-century commentator wrote, “Every hearer of the New Testament truth is either much happier or much more wretched than the men who lived before Christ’s coming.” Such a hearer is also either more secure or more condemned. Which are you?